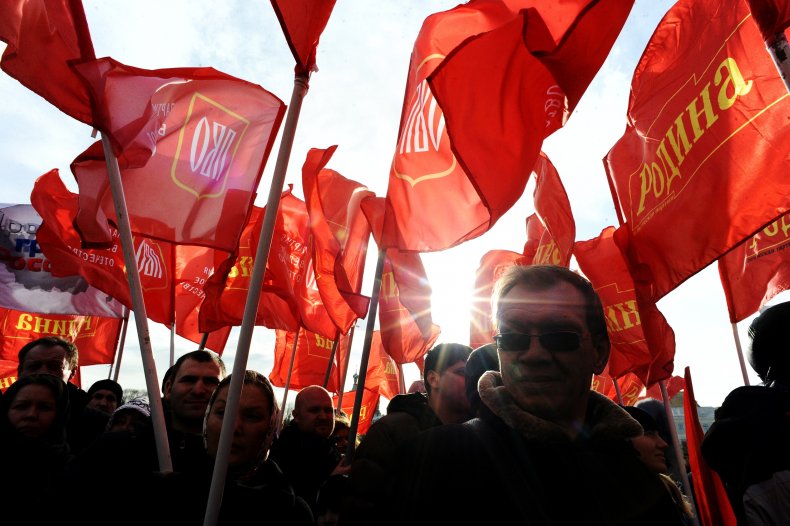 Aleksey Zhuravlyov, a member of the Russian Duma and an ally of Russian President Vladimir Putin, recently threatened to kill a German reporter who has been covering the Russia-Ukraine war.

Ever since Putin launched the invasion of Ukraine on February 24, the Kremlin has cracked down on free press and free speech in Russia, with those voicing opposition to the war facing persecution. Meanwhile, Kremlin-backed television has become a key distributor of pro-war propaganda, often featuring threats against the West.

During an appearance on the Russian news show 60 Minutes, Zhuravlyov—the leader of the pro-Putin Rodina party—made a threat against Björn Stritzel, a reporter for German news outlet Bild, who has covered the war from Ukraine. A video of his remarks was posted to Twitter by journalist Julia Davis on Saturday, who monitors Russian propaganda.

“I don’t give a damn, I want to tell this Nazi: B****, all of us will come and kill all of you,” he said in the video, which was translated by Davis.

His remarks, however, received some pushback from Russian-state television host Yevgeny Popov, who scolded him for “threatening people on our program.”

“Those are journalists. Those are propagandists, but let’s not be like that. Let’s not kill anybody,” he said.

Still, Zhuravlyov said he “could care less” about threatening to kill journalists, even though it is considered a violation of international humanitarian law to intentionally target and kill journalists, who are generally considered to be civilians. Russia, however, has faced allegations of war crimes including targeted attacks on journalists and other civilians in recent months, and more than a dozen organizations are investigating alleged war crimes committed by Russian troops.

In a statement to Newsweek, Stritzel condemned the threats made by the Russian lawmaker.

“It tells a lot about Russian society to have such a freak show as their prime news. While the threats against Westerners like me are good for a laugh, it’s more important to remember that the regime which employs these pathetic clowns is torturing and killing Ukrainians on a daily basis and incarcerating brave Russian journalists like Vladimir Kara-Murza or murdering them like they did with Anna Politkovskaya,” he wrote.

Bild hosts, during their own broadcast, condemned Zhuravlyov for threatening one of their own.

“We freaked out over here when we saw what Russian propagandist are doing and the way they talk about our amazing correspondent,” one host said, who added that the threat followed a report from Stritzel about how Ukrainian troops have used German-supplied howitzers on the frontlines of their defense.

Several journalists, from Ukraine and foreign reports, have been killed since the invasion. Russian troops faced accusations of executing Maks Levin, a reporter for Ukrainian news outlet Left Bank. According to an investigation into his death conducted by the organization, Reporters Without Borders, Russian troops may have tortured him before killing him.

Other journalists to be killed in Ukraine include Brett Renaud, a U.S. filmmaker who was shot dead by Russian troops outside of Kyiv; Yevhenii Sakun, a Ukrainian camera operator killed when Russian forces shelled a television tower in Kyiv; Pierre Zakrzewski, a Fox News cameraman killed when his vehicle came under fire outside of Kyiv; Oksana Baulina, a Russian journalist killed in Kyiv; Mantas Kvedaravičius, a Lithuanian filmmaker killed in Mariupol; and Frédéricd Leclerc-Imhoff, a French journalist killed while reporting on civilian evacuation efforts in the Luhansk region.

Newsweek reached out to the Russian foreign affairs ministry for comment.