TFC: back to the future! Toulouse are back in Ligue 1 this Sunday against Nice 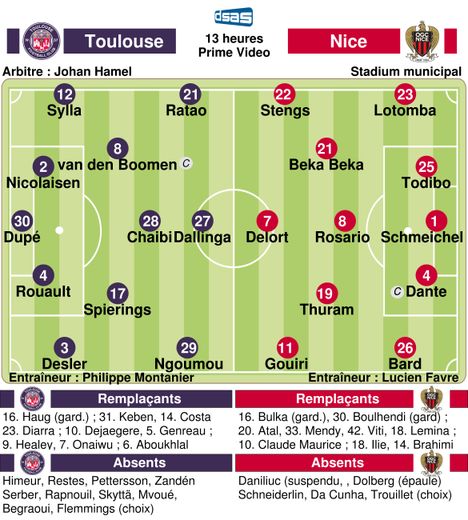 the essential
Two years after its relegation, Toulouse is preparing to return to the top flight. Champions of Ligue 2 with several records at stake last season, the Violets, transformed since the arrival of RedBird, return to Ligue 1 with ambition and driven by strong enthusiasm. First match this Sunday, against Nice at the Stadium (1 p.m.).

Two years is an eternity. Any Toulouse supporter knows this. Relegated to Ligue 2 in 2020 at the end of a nightmarish season, the TFC is finally about to wake up, two years later, to the place it considers its own. In League 1.

Read also :
Mercato TFC: the club is trying its luck again with Hamza Sakhi … and could succeed this time!

Two years is an eternity, but it will not have been in vain. Damien Comolli used it to rebuild the purple house from floor to ceiling. Like all construction sites, this one had its setback: a story of a misplaced hand on the Beaujoire lawn. The Toulouse president felt that we had “stolen a year in L1 from the club”, but he “repaired the injustice”.

The TFC came back more beautiful, bigger, stronger, crushing Ligue 2 on its second pass, and raising a wave of enthusiasm like we hadn’t seen for a very long time on the banks of the Garonne. The TFC now has more than 10,000 subscribers, and sees the future in a big way.

“We want to be in continuity”

Toulouse has found Ligue 1 because its club has found its DNA. That of an ambitious, joyful, offensive team. “We are not going to change our tune”, assumes Philippe Montanier, best Ligue 2 coach for the season. last, at the end of which the TFC exploded the record of goals scored (82). “We want to be in continuity, but we arrive with a lot of humility”, warns the coach, well aware that “adversity will be different.”

Humility, and a UFO label that football France is eager to see more closely. From afar, the Tef with its datas, its Dutch flying over Ligue 2, its public, is seen as the club at which everything succeeds. “There is a lot of enthusiasm around the team, the club, it’s appreciable. But we are promoted like the others”, wants to believe Philippe Montanier.

As for Ajaccio or Auxerre, the march will necessarily be high for Toulouse, counting among the smallest budgets of the elite and displaying one of the least experienced squads. In a group whose average age is around 23, very few have already tasted Ligue 1, and the off-season recruits are no exception to the rule.

The questions are well underway on the adaptation to the higher level of the model which has worked so well in Ligue 2. Damien Comolli urges to trust him, and for the time being, it is intact, like the fervor.

Read also :
Ligue 1: the Nice group fell for the match against the TFC, and there is heavy

“The wait and the support, from the supporters, it affects the players, underlines Montanier. Here too we are in the continuity of last year, where it had contributed to our success. We know that it will be much more difficult this year But if the players wet their jerseys and play with their hearts, the supporters will still be there.” They should be around 20,000 today to support the Violets against Nice, “who don’t fight in the same category.”

Fifth last season, OGC Nice, its senior players like former Toulousain Andy Delort, its great hopes like Képhren Thuram, will be a real test for Toulouse. “We want to win, assumes Philippe Montanier. This season, we are not setting a goal, because that would mean setting limits.” The TFC is back, with the future as its only horizon.