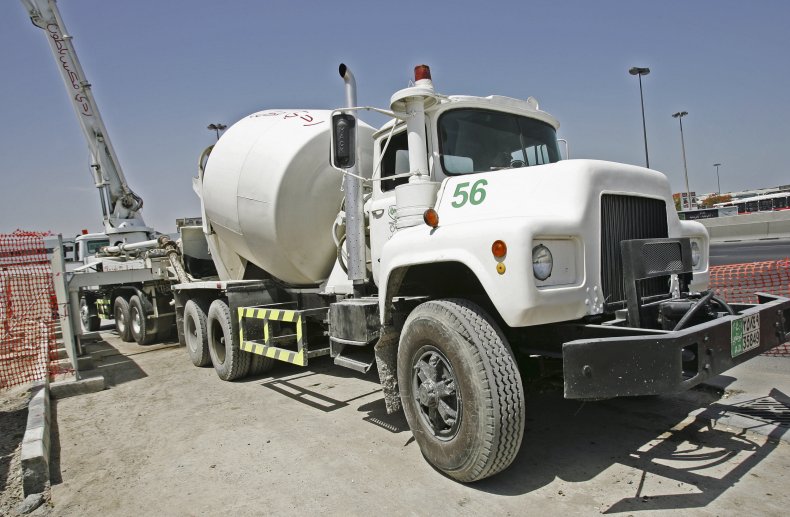 A toddler is dead following an accident in which a concrete truck fell from an overpass and crushed a family vehicle.

The incident occurred near Houston on Friday at around 2:30 p.m. local time. The concrete mixer truck was reportedly heading south on the Beltway 8 East highway when it began to rain, eventually causing the large vehicle to lose control on the slick road and careen over the side in the neighborhood of Woodforest in East Harris County, ABC 13 News reported.

The truck landed on an SUV going through an intersection. The vehicle was being driven by a 54-year-old woman, with her 22-year-old daughter in the front passenger seat and the daughter’s 22-month-old twins (a boy and a girl) in the back seat.

Three of the vehicle’s occupants were able to get out of the crushed SUV with the help of witnesses who rushed to the scene, but the male twin became stuck, according to the Harris County Sheriff’s Office. Despite the efforts of those present, the toddler was pronounced dead at the scene.

As for his sister, “she was kind of pinned in, and I was reaching back, [but] the front seat was a little hard to get,” witness Raymond Romo told ABC 13. “I started yanking on the car seat for the baby to get her out and we were actually able to get her out before she was pinned in.”

The driver, her daughter, and granddaughter were taken to a nearby hospital and treated for minor injuries. Their identities have not been disclosed to the public.

“We tried to do what we can,” added Joe Tijerina, another witness who tried to help the family. “Everybody had to get together to see if there’s anyway we can move the [concrete mixer]. We had an 18-wheeler try to strap a chain to it, to pull it off. We had a big four-by-four dually truck. I mean, it just wasn’t budging.”

The concrete truck was being driven by an unnamed 36-year-old woman, who claimed that the wet roads caused the vehicle to slip before careening out of control. Harris County Sheriff’s Lieutenant Simon Cheng, with the Vehicular Crimes Division, confirmed to the local press that the driver showed no signs of intoxication and that the vehicle did not have any defects that might have contributed to the accident.

An investigation into the accident began at the scene with help from a crash reconstruction team, the county’s Institute of Forensic Sciences, and the county’s District Attorney’s Office. Cheng said that, as of Saturday, he saw no probable cause for charges to be filed.

Newsweek reached out to the Harris County Sheriff’s Office for comment.

A somewhat similar incident occurred in San Antonio in April, when two 18-wheeler trucks collided on Interstate 10, causing one of the vehicles to go over the edge of the highway partially.